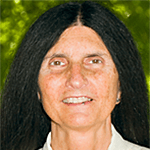 I identify as Tsalági Eastern Cherokee, with ancestry to the Qualla Boundary Reservation, in Cherokee, North Carolina. I am Bird Clan by birth and a traditional dancer, singer, drummer, and storyteller. I adhere to my traditional Tsalági teachings and believe all Native people are in a coming home process...a coming home to the traditional way of life.

I have been educated by my grandmother, mother, auntie, and western academia, and carry a doctorate in psychology and the medicine of my people. I speak two languages and English is not my first language. As a professor, I continue to seek out ways that I can be effective in the classroom and be a change agent for both students, institution, and indigenous community.

My greatest joy, blessing, and learning opportunity has been the parenting of my beloved daughter. Since the passing of my grandmother and mother, she has become my greatest teacher.

In 1986 I was a presenter at the National Women’s History Project Conference in Santa Rosa, CA where SEED founder Peggy McIntosh, Cathy Nelson, later to become the Minnesota SEED founder and director, and Judy Logan, educator and author of Teaching Stories, and later on the staff of National SEED, were in the audience. Prior to the conference, the three of them had not met, nor did I know them. The sharing of my story was the introduction and beginning of both a professional and personal friendship between the four of us; however, it was the ceremony at the end of my story that had the greatest affect and created a spiritual connection. Indeed, it was this spiritual thread of my story that prompted Peggy to speak to me immediately afterwards and later to send a letter inviting me to speak at the first SEED New Leaders' Week in 1987. I accepted because Peggy did not ask me to change my "story," only to come and share it.

The following year Peggy invited me again to the New Leaders’ Week in Colorado where I met Emily Style, co-director of what now had been named the National SEED Project, and my life journey with SEED had begun. From 1987 to 1997 I was a consultant to National, Minnesota, and New Jersey SEED New Leaders’ Weeks and in 1998 Peggy and Emily invited me to co-manage the National SEED Project, which I gladly accepted. I remained in that role until 2002, when I joined Peggy and Emily as the first woman of color co-director of SEED. After Peggy stepped aside to lead the Kellogg expansion in 2011, I continued as co-director with Emily and Emmy Howe until 2016.

As a tenured professor of psychology at Santa Rosa Junior College (SRJC), I was able to ‘seed’ our college in 1995 with two faculty members attending the national SEED New Leaders’ Week. That was the beginning of SRJC SEED. Over the next several years, 12 faculty have been trained at the national New Leaders’ Weeks, ultimately ‘seeding’ over 300 faculty members at our college. In April 1999 I organized the first California SEED Summit hosted by SRJC SEED Leaders and held at Santa Rosa Junior College.

SEED has informed how I am in the classroom as a professor, an administrator, an activist, a mother, auntie, and friend. It has helped to frame my understanding of diversity and multi-cultural issues, in particular, for people of color and other marginalized groups. SEED helped me to "find my voice" in the western world, validated my cultural lived experience, and created life friendships. SEED empowered me within my community to help others to do the same, by becoming "change agents" through sharing their own stories. Most importantly, SEED has given me a way to define who I am as a woman of color in a world of dominance, and the tools needed to navigate oppression and discrimination on a daily basis. As an indigenous woman, SEED has given me a way to better walk in two worlds, the western world and indigenous world, while maintaining my cultural identity and integrity.